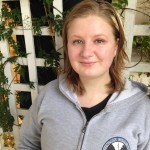 Not liking science has never really been an option for me because my father was a science teacher and I grew up listening to exciting stories about the many crazy things people had done in the name of science. These stories usually involved fire or some form of wild animal!

As I grew up, I became increasingly obsessed with this mysterious world of explosions and dead things, and I made up my mind to be one of these ‘scientist’ people at quite a young age.

Throughout high school I studied a bit of everything, and even for brief moments considered moving to the arts. Thankfully, I came to my senses before I did anything too drastic, and came back to science (mostly because cutting up body parts is far more interesting than analyzing novels like ‘Pride and Prejudice’!).

When I finally graduated from high school in 2008, I enrolled in university to study geography. My favorite subjects at university were spatial science and biology. Although I enjoyed all the dissecting of animals and the traipsing about outdoors and looking at plants that biology offered, I decided that spatial science was the one for me.

Spatial science covers a lot of areas, but I am mostly interested in remote sensing and Geographic Information Systems (GIS). My research at the moment is focused on trying to figure out the best way to find different kinds of grasses in the Midlands using satellites. There are many species of grass in the Midlands and some are endangered, but we still don’t know exactly where these grasses are, so it is hard to protect them.

My work involves collecting lots of satellite images, and building a model from it that can locate different grasses. When satellites that are designed for earth observation pass through the sky, they record the amount of light that is being bounced back to them from the earth’s surface. We can analyze the patterns of this light and use it to identify different objects on the ground, and even figure out different characteristics of these objects.

I’ve been working on my PhD project for 2 years now, and hope to be finished in the next 12 to 18 months. After that, I’m hoping to move overseas and work as a researcher for a few years. I would eventually like to follow in my fathers’ footsteps and become an academic, which is someone who lectures at a university and also does their own research.