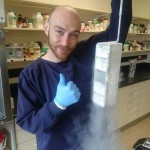 Keenly interested in environmental sciences, John kick started his career by completing a Bachelor of Science degree majoring in Aquatic Biology from the University of Tasmania. He continued with an Honours research project investigating the application of faecal source tracking (FST) within the Tamar River.

Sources of faecal pollution within the Tamar River were identified by screening water samples against a library of host-associated Enterococcus spp. – these are well-known faecal bacteria. We looked at the DNA and phenotype (physical appearance) of the Enterococci using biochemical fingerprints.

John is currently in the process of writing an academic paper on his research findings – this means that the new method he has developed can be shared with other scientists interested in waterway pollution by faecal bacteria. He will continue with his research, undertaking a PhD project which will be focused on refining the FST method and to investigating  the different types of bacteria that live in waste water treatment plants.

John wasn’t always a scientist – he has also been a professional wildlife and landscape photographer, and taught English in Japan before starting his studies in science.