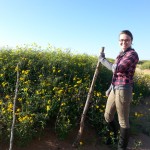 “All children have a bug phase; I never grew out of mine.” – E.O.Wilson.

Edward Wilson discovered the way that ants communicate using pheromones; Terry Erwin discovers new species of beetles from the Amazonian Rainforest; Lisa Bird collects caterpillars eggs from crops and rears them in a laboratory, she uses them to test plants which are genetically engineered to produce their own pesticide; Geoff Allen uses the insects found in dead bodies to work out where and when they died; and I study the ways insects are involved with the environment; what they eat, where they live, including how they affect and help humans – we are entomologists; insect scientists.

I absolutely love insects, and I always have. So much so that I get a bit confused when people ask what I like about them, ‘Doesn’t everyone love insects too?’

I love them because of the great diversity of shapes and colours, and because of the diversity of roles and functions that those forms relate to. They are numerous and diverse, because of this they are involved in our everyday lives in many ways. I love learning about how useful and important insects are, the jobs that they do in the environment and the clever ways that scientists are repurposing them.

I became passionate about scientific communication because people so often think that bugs are creepy and scary, so I feel responsible for showing how beautiful and useful they are.

For example, there is a type of fly that doesn’t eat as an adult, so the juveniles eat and grow more than other types of flies – the extra fat and muscles sustain the adults through their few days of life. The fly maggots will feed on lots of types of food waste: animal manure, vegetable scraps, meat and dairy waste, coffee and brewery leftovers. Because the maggots eat so much they are used to reduce the volume of organic waste produced by supermarkets, meat industries and livestock farms – what’s left over is valuable compost. The big fat stores that they build up can be extracted, and the oil turned it into biodiesel. And all of the protein (muscle) which is left over can be turned into animal food – all from waste products.