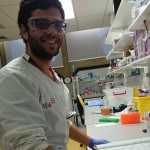 As a kid, I loved experimentation. Playing with fire and burning all kinds of things – even my plastic toy soldiers – was one such experiment. Sometimes I would mix different things together in Mum’s kitchen (especially the bicarb soda) just to see what would happen. I guess it was the experimentation of putting things together to find an answer to my curiosity that really drove these weird and wonderful experiments.
Later, I came to find a passion for biology and a concern for people’s wellbeing and it ultimately led me to study a Bachelor of Medicine Bachelor of Surgery at UTAS. There are some medical conditions that we still haven’t found an answer for. To imagine being told you’re unwell with something that doesn’t have a cure would be a crushing feeling, even for friends and family. Alzheimer’s disease is one such terminal illness whose most common symptom is gradual and worsening memory loss.
My grandfather has trouble with his memory and was diagnosed with Alzheimer’s disease. Coupling my personal interests and a drive to help others on a bigger scale, I now research Alzheimer’s disease.

In particular I am researching what role the brain defenses (inflammatory cells) may have in the disease, since recent research has shown that these cells may not necessarily be as protective as once thought. In fact, some groups of scientists think that they may be the cause of Alzheimer’s disease.

My research involves growing neurons (brain cells) in the lab and treating them with a mixture of things released by this inflammatory cell, so we can better understand what is happening. In the best care scenario, a drug could be designed to target the products being released or modify the cells behaviour to slow or even stop the progression of Alzheimer’s disease.

So, where to from here? Emergency medicine, Alzheimer’s disease and further research each carry an interest for me. Regardless, I wish to continue research as a clinician in whichever field I come to. Science is interesting to me because there is always a chance that I might find out something that no one ever has before. Within it lies the potential to discover something that could permanently change the outcome of a medical condition such as Alzheimer’s disease.