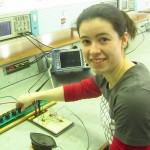 UTAS School of Engineering and ICT

Close your eyes and just listen. If someone talks can you hear whether they’re in front or behind you? Can you tell if someone is walking towards you without even opening your eyes to see them? It turns out that you can and humans are really quite good at it! We use clues from what we hear to be able to locate where someone or something is. Now what if we understood exactly which parts of these sounds gives us these clues? If we can understand this, we can then use these clues to create new sounds which appear as though they’re coming from a location that they aren’t really in. Sound a little like 3D in movies? That’s exactly it, but for your ears. My research is all about creating these 3D sound environments.

The other part of my research involves finding patterns. Science uses patterns to make conclusions about things from what we observe. Some patterns are easy to observe, like gravity; we drop something and it falls, but other patterns aren’t quite so easy to see. The patterns in my research aren’t very apparent to the human eye, so like our solutions to most problems, I get a computer to do it for me. But I can’t just hand my observations to Google and ask it to tell me what the patterns are (yet…). So I use a special artificially intelligent computer that can think in the same sort of ways humans do, only do it better (for this particular task anyway- however I can’t ask it how it’s feeling today or whether it likes green M&Ms better than red M&Ms).

When I was growing up most of my interests at school were music and drama and languages and I studied these right up to Grade 12. I know this sounds like exactly the wrong set of skills for a scientist – but it turns out they’re not! Today I speak three languages, of the computer programming kind, and I have worked on building technology that produces music, plays music and even technology that allows deaf people to hear music.

My father was an Engineer. As a child I had stubbornly announced that when I grew up, I most certainly did not want to be an Engineer. What I didn’t realise then was that being an Engineer did not have to mean cars and steel and bridges. Engineering is a way of thinking, a creative approach to solving problems, and can be applied to any field.